Cambodia namely “The Kingdom of Cambodia”, formerly Kampuchea, is a Southeast Asian Nation that has its borders with Thailand, Lao, Vietnam and the Gulf of Thailand. The country’s main capital is Phnom Penh. 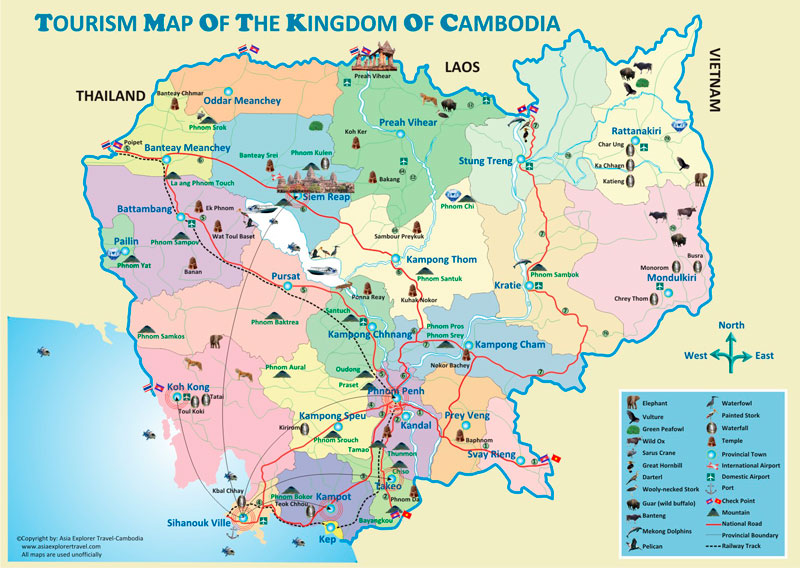 Geography :
Cambodia is situated in the Southwest of the Indochinese peninsula, with its area of 181,035 square kilometers, and border Thailand to the West and Northwest, Lao to the Northeast, Vietnam to East and Gulf of Thailand to the Southwest. Cambodia’s geographic coordinates are 13 00 N, 105 00 E. Cambodia’s terrain consists mainly of low plains with mountain to the Southwest and North. Two dominant physical features of Cambodia are the Mekong River which runs from North to South of the Country, and Tonle Sap lake. Natural resources include oil and gas, timber, gemstone, iron ore, manganese, phosphates and hydropower potential.

Climate:
Like most of the Country in Southeast Asia, Cambodia’s climate is hot and warm in almost a whole year. The climate is dominated by annual monsoon cycle of dry and rainy season on which rainy season lasts from May – October, and the dry season from November – April. December – January are the coldest months while the hottest period is in April. The average temperature is around 27-28 degree C. 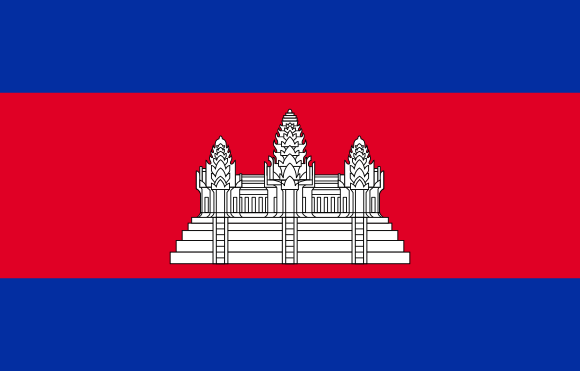 National Flag:
The flag of Cambodia symbolize the Country’s slogan: Nation, Religion, King. The two (2) large stripes represent royalty and the center red stripe represent the nation. The image of the white temple stands for the nation’s religion.

Religion:
Theravada Buddhism is the prevailing official religion in the Kingdom of Cambodia and approximately ninety percent (95%) of the population is Buddhist. Islam, Hinduism, Christianity are also embrace in Cambodia. Since Buddha statues and images represent the revered Buddha, visitors are asked to treat all such statues and images with respect, so as not to offend the local people. In Cambodia, regardless of religion, the country maintains a harmonized state.

National Flower:
National flower is Romduol, a small yellowish-white flower is the national flower of the Kingdom of Cambodia. Since ancient times, Cambodian women have often been compared to the Romduol flower because of its attractive fragrance – a unique scent that is prominent in the late afternoon and can travel over long distances with the wind. With its sturdy stems that measure up to 30 cm, the Romduol plant can grow to a height of 12 meters. The plants are being planted to enhance the public parks.

Customs & Tradition:
Cambodian culture & tradition have had a rich varied history dating back many centuries. Over the year the people of Cambodia developed a set of unique tradition from the syncretism of indigenous Buddhism and Hinduism. Cambodian have been raised to respect to their culture and are very traditional in their way of life. Tourists will the well mannered Cambodian expressing a friendly … Chumreap Suor when they meet each one.

Chumreap Suor:
Cambodian traditionally greets with a Sampeah, which involves pressing the palms together before the chest with a slight bow-head  and greeting with polite words. Chumreap Suor customerily, the higher the hands are held and the lower the bow, the more respect is conveyed. Except when meeting elderly people or government officials, between men, this custom has been partially replaced by handshake. Women usually greet both men and women with the same traditional greeting. Although it may be considered acceptable by foreigners to shake hands with Cambodian, it is more appropriate to respect the custom and respond with a word Chumreap Suor.

Khmer Traditional Dances:
There are many classic dance forms in Cambodia, of which a highly stylized art form was once confined mainly to the courts of the Royal Palace and performed mainly by the females. Known formally in Khmer as Robam Apsara (Apsara Dance), the dancers of this classical form are often referred to as Apsara Dancers.